Abstract: This paper provides a review of the existing literature about megaclassification of the living beings. Novel classification system is introduced, including 5 dominions and 17 kingdoms. In addition, a new nomenclature of higher taxa has been proposed with a premise that the dominion names end with a suffix "-biota", subdominions with a suffix "-konta", kingdoms with a suffix "-ida" and subkingdoms with a suffix "-ides". Dominion Prionobiota comprises acellular organisms without nucleic acid, acellular organisms with nucleic acid have been classified in dominion Virusobiota, dominion Bacteriobiota consists of typical prokaryotic organisms, and dominion Archaebiota comprises specific organisms of prokaryotic structure, whereas dominion Eukaryobiota entails all living beings with eukaryotic organization. 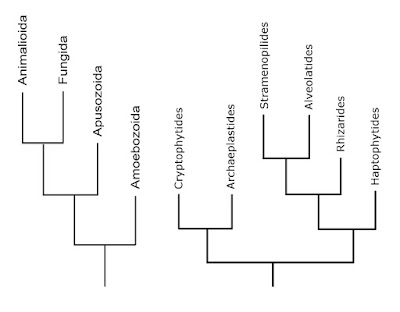 Abstract: Based on theoretical conclusions, a new family of testate amoebae, Padaungiellidae, is described. It includes three genera: Alocodera, Apodera and Padaungiella. The most striking characteristic of the members of this family is an elongated neck, and absence of sets of teeth and septa along the oral-aboral axis on the inner side of the neck. The most common species of this family is Padaungiella lageniformis. Morphometrically, this species is not analyzed yet, so the qualitative and quantitative characters of a sphagnicolous population of P. lageniformis from the Vlasina Lake area (Serbia) are reported here. Quantitative characters were analyzed by univariate statistical methods. Coefficients of variation were moderately low for all the measured characters (range from 4.37 to 10.71%). Frequency distribution of only seven of sixteen variables showed approximately zero level of kurtosis, which indicated that specimens with average measurements were not predominant in the studied population. This paper provides evidence of the presence of an aberrant form of P. lageniformis. 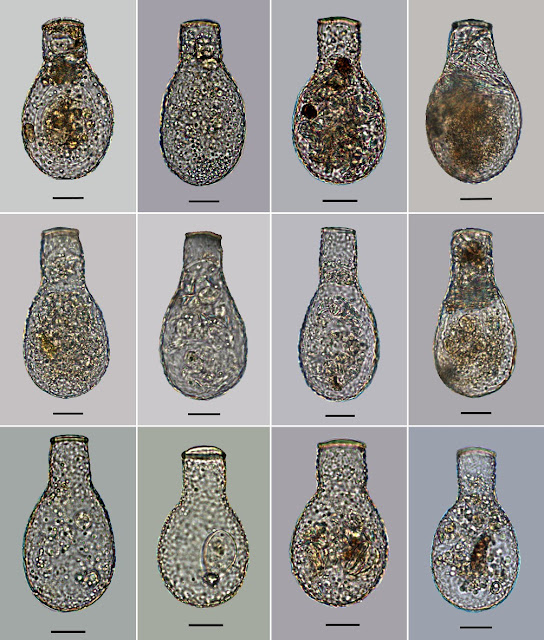 Abstract: Here we present morphological and morphometrical data from sphagnicolous population of Quadrulella longicollis (Taranek) and both qualitative and quantitative characters of Q. symmetrica (Wallich) from the Vlasina Lake region (Serbia). Both broad and narrow types of Q. longicollis shells were observed, but intermediate forms were not noted. Subsequent data analysis supports the species status of Q. longicollis recently proposed in a molecular phylogenetic study. Based on 603 specimens, eight types of Q. symmetrica shells were observed: barrel-shaped shells, short broad shells without a pronounced neck, elongated pyriform shells, elongated square shells, short square shells, slightly curved shells, short broad shells with a pronounced neck and narrow shells. Intermediate forms between these types were also noted. Coefficients of variation were moderately low for all measured characters in the studied population. The minimal variability (4.5%) was observed for shell length, while maximal variability (9.35%) was recorded for the area of optical section. Analysis of the size frequency distribution suggests that Q. symmetrica is a size-monomorphic species. 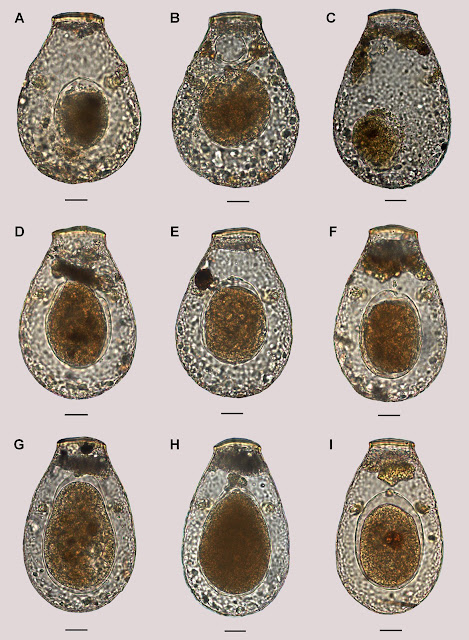 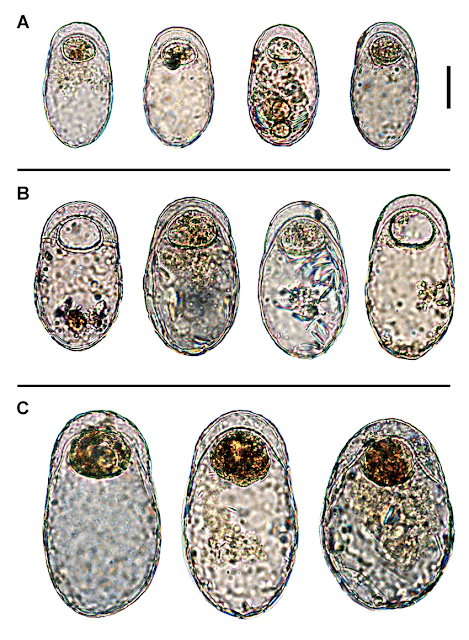 Abstract: Nebela collaris s.l. is the best studied species complex within the family Hyalospheniidae. This complex includes 11 taxa established on the basis of small differences in shell shape and size. The type species for this complex (N. collaris s.s.) was defined based on only four specimens. Here we present morphological and morphometric data from moss-dwelling population of N. collaris s.s. from Krečko Brdo Hill (East Herzegovina), based on 765 specimens. Shell length ranged from 87 to 115 μm (previously reported 95-115 μm), shell width from 53 to 73 μm (previously reported 74-81 μm) and aperture width from 21 to 31 μm (previously reported 28-32 μm). In the literature, reported shell length/shell width ratios range from 1.38 to 1.47, however subsequent morphometric analysis yielded values from 1.33 to 1.91. These data show that N. collaris s.s. can be considered to be a very variable pseudocryptic species among testate amoebae. Coefficients of variation were low for all measured characters in the studied population. Minimal variability (4.28%) was observed for shell length, while maximal variability (6.45%) was recorded for aperture width/shell length ratio. Analysis of the size frequency distribution suggests that the studied population of N. collaris s.s. is size-monomorphic. 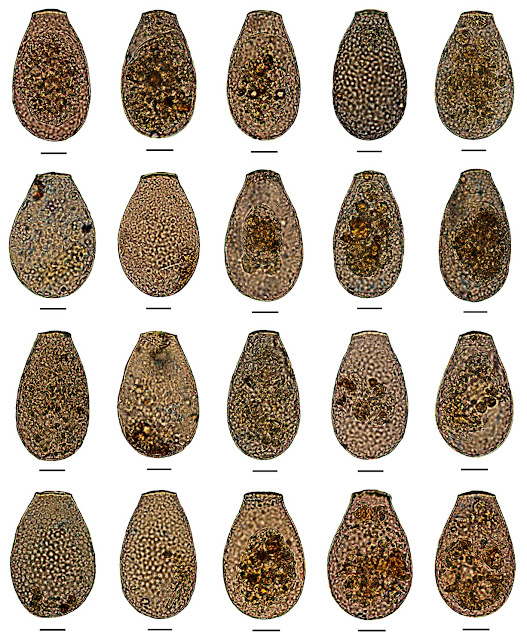 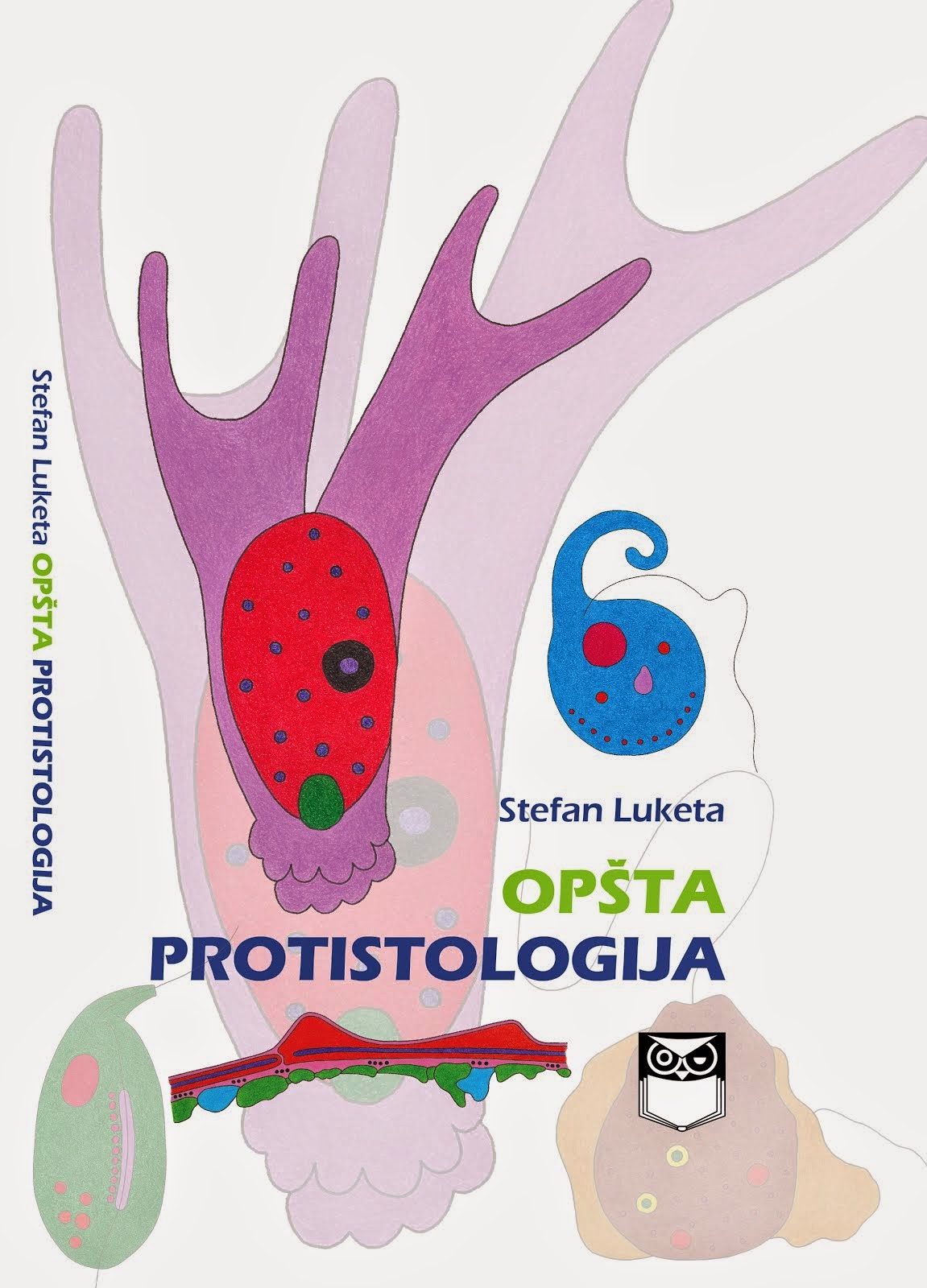